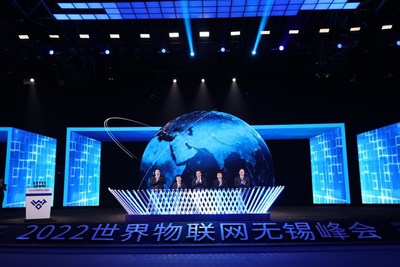 As a main part of the 222 World IoT Exposition also held in the city, the summit attracted elites worldwide to jointly discuss future development, latest scientific and technological results and excellent application cases of the IoT industry.

As a pioneer in IoT development, Wuxi is the only national sensor network innovation demonstration zone in China. The city has been continuously tapping into the industry in recent years.

In 2021, the scale of the city's IoT industry exceeded 350 billion yuan, accounting for 50 percent of that in Jiangsu and nearly 25 percent of  national total. The figure kept a growth rate of 14 percent from January to September this year.

Driven by the industry, the city's digital economy has made great strides, with the scale of core industries surpassing 600 billion yuan in 2021, ranking first in Jiangsu regarding development index.

The 2022 gold award results of new technologies, new products and new applications of the IoT industry and the IoT innovation development index were also released at the summit.

Wuxi inked cooperation agreements at the summit with China Unicom, the China Center for Information Industry Development with the Ministry of Industry and Information Technology and Chinasoft International Limited, with the aim to promote the development of the digital new economy in the city.

Taking artificial intelligence plus IoT integration and innovation as the main line, Wuxi will focus on developing intelligent sensors, internet of vehicles and industrial internet by enhancing the building of innovation platforms, improving related regulations and creating better business environment for related enterprises.

It is learned that the World IoT Exposition has attracted participants from over 50 countries and regions and more than 1.1 million attendees since it was first held in 2010, with nearly 800 major projects launched, driving a total investment of more than 200 billion yuan in the IoT field.